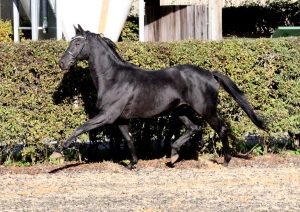 Räuberfürst was commented by Lars Gehrmann on the occasion of his licensing as follows:

“A very interesting, still youthful-looking stallion with an incredibly elegant charisma, of very high nobility, a good top line, wonderfully harmonious side image, an extremely likeable horse, always concentrated. A very interesting pedigree alternative also with Lossow – Suchard … which has become really rare in Trakehner breeding, on the other hand combined with Finley M, Stradivari and Habicht, that is a pedigree that is not standard off the shelf, but what it also deserves breeding to come to a greater influence … “

“Räuberfürst conveys high breeding and sporting standards in his bloodlines, which is far removed from the mainstream. … his pedigree shows 44.7% thoroughbred genes. “(DT, Erhard Schulte) 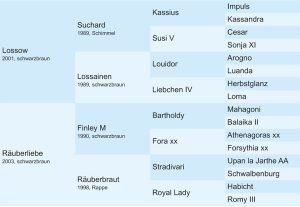 “The valuable coordination of the rather rare pedigree is an important genetic alternative in the breeding program.” (Breeding manager Lars Gehrmann, November 2015) 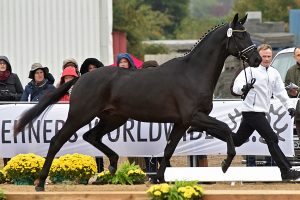 The maternal dynasty of Räuberfürst, who was particularly celebrated on the occasion of his licensing due to his elegant manners, his unmistakable sportiness and also his sovereignty in all tasks, is one of the very narrow but particularly high-performance mare dynasties of the Trakehner population. The line of Rute O169A is rooted in a traditional mare family of East Prussian private breeding, which was able to refer to a long gallery of ancestors in the home breeding area of ​​East Prussia. The trek mare, born in the Rastenburg district in 1941, was one of the foundation mares from the very beginning when the Trakehner Association was founded in West Germany. In 1949 she gave birth to her first foal; When she left the breeding stage at the age of 19 in 1960, she had documented exemplary fertility with nine living foals in nine years of breeding. – One of the most valuable breeding traits that the chestnut mare passed on to her daughters and their offspring.

Nord, the father of the founding mare Rute, worked all his life in the service of the Rastenburg State Stud. As the son of the Northwest, he carried genes that were less frequently represented, but enjoyed an excellent reputation, as their bearers were distinguished by their extremely versatile disposition, also by loyalty to work and an excellent attitude towards all requirements. Nordwest worked primarily in the von Kuenheim family’s Juditten stud, one of the oldest and most successful in East Prussia, and was one of the main sires in Rastenburg, as did his full brother Erhabener in the Braunsberg state stud, who was one of the main breeding pillars of the legendary breeding of the Princes zu Dohna in Schlobitten and Prökelwitz became. In her further maternal genealogy, Rute also has highly respected remont fathers and sires of versatile profitability via Fanatiker-Fischerknabe and Rubel-Römer.

Under Rute’s three registered daughters, Ramona by Cherusker xx, who was born in 1952, was supposed to impart the broadest and most high-quality principles to the family. She was one of the founding mares of Erich Kraushaar’s breeding, Hanover-Laatzen. Her second daughter Rudzanny by Impuls produced Remember by Schwarm, the first licensed stallion of the small family, who unfortunately had no chance in terms of breeding, as well as the M dressage horse Rubin by Gunnar. Rute’s eldest daughter and Rudzanny’s sister Rominte by Absalon is now responsible for the most important branch of the family and thus also for the branch of the family from which Räuberfürst emerged. Among the 12 foals there is the daughter Roxy by Halali, a founding mare of the ATA and still one of the main pillars in the breeding program of the North American Trakehner daughter association. The stallions Roland by Herbststurm, Romelos by Melos and Rising Sun by Zauberklang, who were licensed in the New World, are part of the family. Furthermore, FEI dressage horse Rotdorn by Halali, the medium dressage horse Rotang by Rossini and the successful basic tests up to and including L, Rhodos by Rossini, Romano by Rossini and Rominto by Carino, represent their hereditary dam Rominte, who have been successful for many years in numerous advanced level dressage competitions. In addition to Roxy, Rominte had four other daughters, among whom Romy by Horrido, who was born in 1970, took on the task of leading the maternal line into the future – up to Räuberfürst, the youngest and perhaps also the most valuable protagonist of his family to date. Here 45 years ago, a guard of sires who have proven themselves at the highest and highest athletic level is now exerting influence. Horrido is the beginning, because although the Ilmengrund son retired due to a broken leg after only five years as a Zweibrücker state sire, he still enjoys a high reputation as a production sire, not least documented by his mother Hapag (Hecuba), who won the Bavarian dressage championships with Ilonka Silberhorn. Sportiness and performance demands continue with Royal Lady, the daughter of Habicht, who is victorious in international eventing championships, with Räuberbraut, the daughter of Stradivari (by Upan la Jarthe AA), who is often successful in the M course, with Räuberliebe, the daughter of the champion stallion Finley M, who knew how to assert himself emphatically in the large square up to S and can also refer to one of the most important and most moving thoroughbred mares of the total Trakehner breed with his dam Fora xx by Athenagoras xx.

The focus here is already on the dam of the Räuberfürst, who thanks to the breeding and sporting visions of the St. Vitus stud, Räuberfürst owes the bloom of his family to an elitist genealogy in terms of performance: Mahagoni, Pasteur xx and Fora xx-Athenagoras xx connect with high-class Anglo-Arabic components, which are defined by Stradivari-Upan la Jarthe AA and Habicht-Burnus AAH.

As the youngest, but also one of the last, Räuberfürst represents his paternal line of Humboldt-Impuls, and indeed in what is probably the most powerful branch. As one of the youngest Impuls sons, Kassius was also considered to be one of the sportiest, winners of the riding horse championships in Wiesbaden and later trained up to advanced level dressage. With Ulexis he had a son who was always successful in numerous difficult show jumping competitions, with Räuberfürst’s grandsire Suchard a sire who personally knew how to shine in the S-course with exemplary personal performance. Despite limited breeding opportunities, the beautiful gray horse produced successful performance horses in series up to the highest level of all tournament sports. Hardly surprising, because his maternal grandsire Cesar, the son of Ozean, who, as Grannus’ grandfather, wrote an important chapter in international tournament sports history, joins his father, who has proven himself in this respect. Close family ties are therefore also maintained with Sir Graditz, the winner of international jumping championships on the British Isles.